The Swank diet for multiple sclerosis 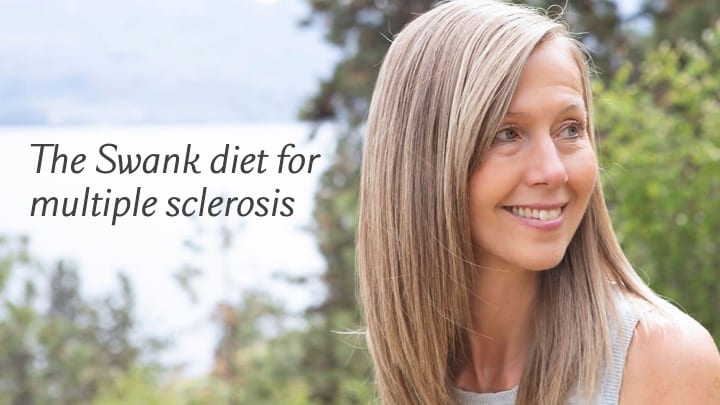 The Swank diet for multiple sclerosis first appeared in the 1950s that we reviews in our The Best MS Diet guide. It was created by Dr. Roy Swank, who began studying multiple sclerosis (MS) in the 1940s. His research in Canada and Norway led him to conclude that MS was less common in coastal fishing towns, where people ate more fish than in the mountains, where there was a higher intake of meat.

From his research findings, he put his first MS patients on a low-fat diet in 1948. Later, he wrote The Multiple Sclerosis Diet Book, which is what we know as the Swank diet.

Dr. Swank’s theory is that high-fat foods cause blood cells to clump, which interferes with circulation, reduces oxygen supply and hinders the function of vital organs like the brain and heart.

His diet focusses on limiting fats, and includes non-fat dairy products, as well as fruits, vegetables, whole grains, and lean fish. Dr. Swank claimed that his diet could “slow progression of the disease as well as benefit overall health.”

Quick Facts about the Swank diet

1. No processed foods containing saturated fat and/or hydrogenated oils.
2. Saturated fat should not exceed 15 grams per day. Unsaturated fat (oils) should be kept to 20-50 grams/day.
3. Fruits and vegetables are permissible in any amount.
4. No red meat for the first year, including pork. After the first year, 3 oz. of red meat is allowed once per week.
5. White-meat poultry (skinless) and white fish are permissible, but avoid dark-meat poultry and limit fatty fish to 50 grams (1.75 oz)/day.
6. Dairy products must contain 1% or less butterfat unless otherwise noted. Use egg whites only, no yolks.
7. Cod liver oil (1 tsp. or equivalent capsules) and a multi-vitamin and mineral supplement are recommended daily.
8. Whole-grain breads, rice, and pastas are encouraged.
9. Daily snacks of nuts & seeds are good sources of natural oil, and help maintain a good energy level.

Can the Swank diet help with MS?

Dr. Swank published several articles advocating the benefits of a low-fat diet for people with MS, and these included research based on the findings of his original studies.
In 1990, he published a 34-year follow-up study on 144 people with MS. He reported that those who ate less than 20 g of saturated fat per day had less disease progression and were less likely to die than those who ate more saturated fat.

However, the study had several weaknesses:

Concerns with the Swank diet

There are some problems with the Swank diet:

My version of Dr. Swank’s book is from 1977! Back when I first read it, it offered three clues:

1. People with MS suffer from sudden attacks, which could be attributed to blood vessels
2. His research found higher MS rates in different geographical areas
3. Areas with higher MS rates had more animals, therefore more animal fat in their diets, which he concluded caused more MS

When we look at diet alone, the Swank diet would make anyone feel better, because his eating plan reduces processed foods, which is always a better lifestyle choice. However, our eating plan is exactly the opposite. With the Live Disease Free eating plan, we eat a high fat, low-carb diet.

Research has disproven the low-fat craze of 20 years ago, and now we know a diet high in carbohydrates makes us sick in so many ways.

What is interesting is that Dr. Swank’s protocol is not just a diet – following his eating plan is important but his patients also had to have a lot of rest, and take a mild sedative for 1-3 years while being studied. Around the same time, a neurologist in The Netherlands was also treating MS patients with Antihistamines.

If you’ve been following me for a while, you know the connection between infection and disease. While the Swank diet is not the ideal MS diet, it brings more pieces of the puzzle together. Back in the 80s when I tried his eating plan I personally didn’t notice any difference – the MS stopped when I treated infections.

So much has changed over 30 years! When we understand that there is a cause, then everything we do is to treat that cause. That’s why my students see so much success – because the three main infections that cause disease (fungus, parasites and bacteria) thrive on carbs, not on fat. As we reduce carbs, we see inflammation going down much more than you would ever see from just eating a low-fat diet.

To find out more about the Swank diet, please watch my video below!